Dynamic Spectrum Sharing (DSS) was included in 3GPP Release 15 to facilitate a cost-effective method for 5G New Radio (NR) coverage in existing LTE spectrum. DSS (figure 1) is based on the concept that 5G NR signals are transmitted over unused LTE resources, which is much more economical than redefining spectrum specifically for 5G or 4G.

For DSS to work, mobile device and network engineers must consider the detailed structure at the resource block (RB) level, so the resource allocations for the control channels and reference signals can be effectively distributed. Engineers must implement a sound testing process to ensure mobile devices, network elements, and systems operate according to specification in increasingly complex network architectures that leverage DSS.

Mobile operators can implement DSS into their networks using one of three methods. In this post, we will highlight each, as well as provide insight on testing best practices.

MBSFN is used in LTE for point-to-multipoint transmission, such as Evolved Multimedia Broadcast Multicast Services (eMBMS). It allows LTE cell reference signals to be used on certain subframes, so the channel can be split and LTE or 5G NR can be transmitted without restrictions.

MBSFN is only available in download (DL). It will generally be used in 5G NR configurations when rate matching is not possible, such as Synchronization Signal Block (SSB), Channel State Information Reference Signal (CSI-RS), and 5G NR at 30 kHz. LTE user resources are highly restricted, since it only allows for single antenna port type transmission.

In MBSFN, specific subframes within an LTE frame reserve the last 12 Orthogonal Frequency Division Multiplexing (OFDM) symbols of said subframe to be free from other LTE channel transmission. These reserved symbols are used for 5G NR signals instead of eMBMS in a DSS environment, as they disable the “always on” LTE signals, such as Cell Reference Signals (CRS). A guard band is required, but all OFDM symbols don’t punctuate signals, as is the case with rate matching.

Another consideration is that LTE and 5G NR physical downlink control channel (PDCCH) can be in different RBs in the same MBSFN area. Typically, LTE PDCCH can occupy 1-3 symbols based on cell load. The first two OFDM symbols are for LTE PDCCH. The third is dedicated to DSS 5G NR mobile devices.

Using MBSFN subframes (figure 2) is completely transparent to legacy LTE-only devices from 3GPP Release 9 onwards. It is the simplest way to deploy DSS, as 5G NR is free to be transmitted in any numerology (15 kHz, 30 kHz, 60 kHz) in the MBSFN region and is supported by legacy LTE. 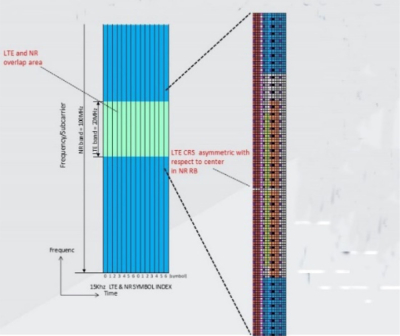 This technique allows mobile devices to puncture the 5G NR transmission, so they do not interfere with subcarriers designated for LTE. Certain signals, such as cell reference, need to be omnipresent over the entire bandwidth in LTE. With rate matching patterns, LTE devices recognize LTE reference signals while 5G NR mobile devices will see the NR transmission and ignore the LTE cell reference signals.

Rate matching patterns apply to DL LTE and 5G NR PDSCH, so it is based on the 15 kHz spectrum co-existence system (SCS). The network defines the rate matching pattern that coincides with the positions of the LTE cell reference subframes. It is extremely beneficial for 30 kHz SSB insertion.

DSS rate matching is configured by Radio Resource Control (RRC). Verification for the configuration is required. These parameters enable 5G NR devices to do rate match without resources on which LTE signals are allocated.

Typical details in the rate match pattern LTE CRS message include carrier bandwidth with the number of RBs, center LTE carrier frequency, number of LTE CRS antenna ports, and LTE cell ID. The LTE MBSFN subframe configuration list from SIB2 is an option, if MBSFN is in use. All these attributes, which are standardized in 3GPP 38.331, allow 5G NR devices to rate match around LTE signals.

This method deals with non-MBSFN subframes and is for Ultra-Reliable Low-Latency Communication (URLLC) applications. The symbols can be placed anywhere inside the 5G NR slot. In respect to DSS, mini-slot operation eliminates symbols that contain LTE CRS and schedule only free ones for 5G NR transmission. Mini-slot scheduling is not well suited for eMBB applications, as too many resources lie outside of NR scheduling. It still can be utilized in special cases, however, including 30 kHz SSB. It is likely be the least used implementation strategy.

Initial 5G NR deployments use the LTE core for data on the wireline side. The core is plugged into the 5G NR Over-the-air (OTA) radio link side in an “option 3” architecture. Figure 3 provides an outline of the eight different architectures. In option 3, the device uses the 5G cell for carrier aggregation and is secondary to the LTE side, which handles device control. Most 5G migrations will be done using the full 5G core network and the various option 3 alternatives using the LTE core network.

All option 3 architectures use Non Stand-alone (NSA) mode. With NSA, there is dual connectivity for 4G and 5G radios. This is in contrast to other options that will utilize Stand-alone (SA) mode. In a SA deployment, the devices are only connected on 5G. DSS is more advantageous in SA mode, as it enables access to low LTE bands that will increase throughput rather than static 5G bands.

Ensuring DSS operation requires proper infrastructure and device testing. Table 1 lists verification items to ensure LTE and 5G NR do not interfere. Engineers need test platforms that support all DSS options and can switch between them or combine the features that comprise them. Testing platforms also need to support the various network architectures, such as option 3. All necessary RF and protocol measurements must be supported, too.

Test platforms must have the high performance necessary to process the highly complex signals efficiently. The solutions should support EN-DC option 3, 3a, 3x. They also need to be able to reduce interference due to leakage power, EVM, and synchronization between LTE and 5G NR to provide high-quality service.

We have only scratched the surface with DSS and testing best practices. For more information on both, download a DSS Guide white paper.

Given the $80+ billion investment by mobile operators, the rollout of 5G was inevitable. Another certainty ...