IEEE 802.11 – a.k.a. Wi-Fi – and Bluetooth® have now been in use for 20 years. Their widespread adoption in everything from cell phones, headsets, and PCs to credit card readers and children’s toys has led market analysts to estimate that there are 10+ billion Bluetooth and Wi-Fi devices active in the world today. The number of connected devices in the 2.4 GHz ISM band will continue to rise as new applications are established in Internet of Things (IoT) and Machine-to-Machine (M2M) environments.1

As all these use cases overcrowd the ISM band, spectrum monitoring becomes more imperative to create an optimal user experience for an ever-demanding consumer base. This is no easy task. A typical public space, such as an airport, entertainment venue, or your favorite shopping center, may have thousands of consumers accessing the 2.4 GHz spectrum at any given moment. Even people in their homes may see Wi-Fi access points from a number of neighboring properties. In these situations, user density can restrict throughput and ultimately impede the user experience.

The IEEE 802.11 standard defines 14 channels in the 2.4 GHz band with each channel typically being about 20 MHz wide (Figure 1). In the real world, though, only three or four non-overlapping channels are possible. In the U.S., channels 1, 6, and 11 are the most common. The access points for these channels continuously transmit beacon signals so that users can find and connect to their network. 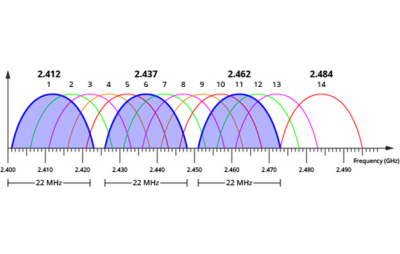 While the Wi-Fi standard allows for some flexibility, these beacon packets are typically transmitted every 102.4 ms and have a duration of a few milliseconds. Beacon signals are transmitted using the lowest modulation scheme supported, which in the 2.4 GHz ISM band is differential binary phase shift keying (DBPSK) or differential quadrature phase shift keying (DQPSK). When transmitting data between a user device and access point, the modulation standard changes to orthogonal frequency-division multiplexing (OFDM) to increase data throughput.

Bluetooth Basic Rate (BR) and Enhanced Data Rate (EDR) radios use a 79 channel, pseudo-random frequency hopping radio with 1 MHz channel spacing. The rate is 1,600 hops a second, giving an interval of 625 µs, but again real world scenarios are much different – a 366 µs packet rate is typical. When Bluetooth Low Energy (BLE) rolled out, it used fewer channels and shorter packets. This helped reduce battery consumption and enabled watches and low-power headsets to incorporate the technology.

Bluetooth Revision 1.2 uses adaptive frequency hopping (AFH), which temporarily removes channels from the hopping plan that were experiencing high levels of interference. This technique improves the Bluetooth user experience in the presence of high levels of Wi-Fi activity.

As Wi-Fi and Bluetooth evolve and become even more prominent, different test tools are needed to ensure networks match Key Performance Indicators (KPIs). Traditionally, field technicians and engineers used swept frequency spectrum analyzers to monitor activity in the 2.4 GHz ISM band. Swept-tuned instruments, however, are not able to give a comprehensive view because most signals in the band are short in duration and/or frequency hop at very fast rates.

Monitoring up to three Wi-Fi access points and their connected devices along with Bluetooth devices and other potential users becomes impossible with a swept frequency spectrum analyzer. Using a trace maximum hold feature is not effective because it does not reveal the real-time activity in the spectrum, and signals that appear for short durations may go undetected.

Field personnel responsible for network performance need a real-time spectrum analyzer (RTSA), like the Anritsu Field Master Pro™ MS2090A (figure 2). It provides a continuous stream of FFT measurements over a 110 MHz analysis bandwidth to cover the entire 2.4 GHz ISM band in a single display. Within this bandwidth, all signals of duration greater than 2.055 µs are captured and displayed at their full amplitude. 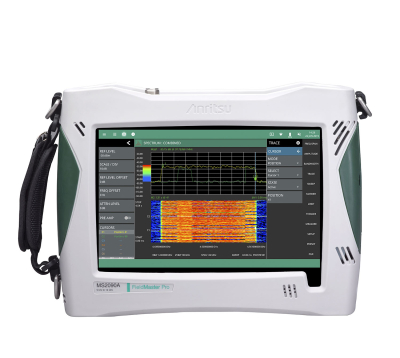 Better Insight with a RTSA

When a BLE device is active, the three advertising channels can be seen at 2.402 MHz, 2.426 MHz, and 2.480 MHz (Figure 3). The same packet is transmitted on each of these channels advertising sequentially and listening devices monitor them to establish a connection. The advertising packets are transmitted every 20 ms to 10.24 seconds and are typically 2 ms in duration. 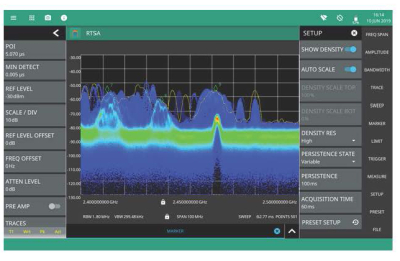 With the RTSA spanning the full 2.4 GHz ISM band, three Wi-Fi access points can also be seen. Making measurements on these environments are necessary in facilities that provide full site Wi-Fi coverage, with geographically adjacent access points separated in frequency. When the access points are transmitting beacons with phase-shift keying (PSK) modulation rather than OFDM, the occupied spectrum has a curved shape.

Field engineers and technicians can view the spectrogram and power density simultaneously so a record can be kept of all signals transmitted over the spectrogram time interval. Each spectrogram line represents the max hold of all FFTs over a 60 ms interval. As the access points are beaconing 4 ms packets at a 102.4 ms rate, a signal is always detected in the spectrogram and spectral density displays, as shown in figure 4. 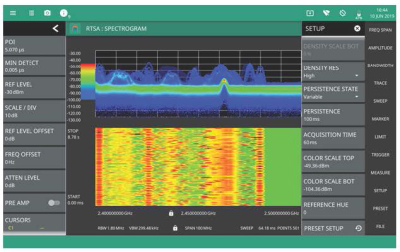 When the access points transmit data, OFDM modulation creates a flat top signal spectrum, while maintaining 20 MHz bandwidth. If a Bluetooth device is activated to find other nearby BR/EDR devices, it initiates a fast scanning raster of defined frequencies.

When the 2.4 GHz ISM spectrum is crowded, the Bluetooth adaptive frequency hopping algorithm reduces frequencies from the standard 79 channel hopping pattern that are not regularly receiving acknowledge packets from the paired product. A RTSA spectral density plot can clearly show when a Bluetooth AFH algorithm has stopped using the channels due to an active Wi-Fi access point.

We’ve only briefly discussed why a RTSA is necessary to measure the ISM band in today’s environments. To learn more, download a new application note entitled Monitoring Interference in the 2.4 GHz ISM Band with a Real-Time Spectrum Analyzer.

With all the talk about 5G New Radio (5G NR) being deployed, we are once again reminded of the conundrum of...