With all the talk about 5G New Radio (5G NR) being deployed, we are once again reminded of the conundrum of the overcrowded RF spectrum. Along those lines (pun intended), T-Mobile’s nationwide 5G rollout will be built upon its 600 MHz Extended Range LTE network that is currently being deployed and is found in 1,254 cities and towns throughout the U.S. All this wireless infrastructure creates new passive intermodulation (PIM) issues that must be addressed by field engineers and technicians responsible for optimal network operation.

The source of PIM can be very difficult to locate because it can be caused by internal elements (i.e. loose connectors, damaged cables) or external factors (rusty bolts, fences, metal-to-metal contact, etc.). Locating the source and eliminating PIM, however, is a necessity as it will lower base station reliability, data throughput, and call quality, resulting in networks failing to meet KPIs and causing customer churn.

If operators in the 600 MHz band utilize their own 5 MHz or 10 MHz spectrum blocks, they should experience few PIM issues. That’s because IM21 or IM9 generated by these blocks are usually well below the receiver noise floor and not strong enough to cause interference in the 600 MHz uplink bands, as shown in figure 1. 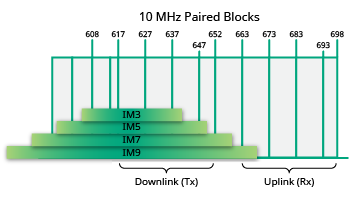 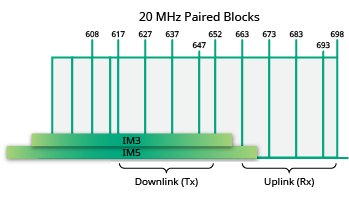 PIM issues – IM5 – will occur, however, if mobile operators use their own 20 MHz spectrum blocks in isolation (figure 2). 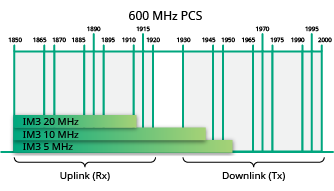 Even though only T-Mobile is utilizing the 600 MHz spectrum, its effect can be felt by all mobile operators, as it is rare that individual carriers utilize their spectrum in isolation. Co-location on macro sites and within distributed antenna systems (DAS) means multiple frequency bands are likely to be combined simultaneously. Significant interference is possible when multiple 600 MHz blocks are combined at the same site.

There is a potential bigger problem with the new 600 MHz spectrum, as the IM3 products generated by an operator may cause interference in the PCS 1900 and AWS 2100 MHz uplink bands. The 5 MHz, 10 MHz or 20 MHz blocks of the 600 MHz spectrum can generate IM3 covering the entire PCS or AWS receive bands. Therefore, it becomes imperative to conduct the appropriate testing using a dedicated solution, such as the PIM Master™ MW82119B, to minimize PIM. 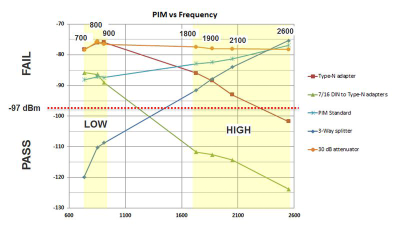 Testing PIM at both frequency bands is a necessity to mitigate PIM issues in the field. This critical point – as well as the need to use an analyzer that can conduct PIM vs. Time measurements – is made clear in figure 4. The yellow trace shows the IM3 1885 MHz band and measures –62 dBm, whereas the green trace shows the IM3 663 MHz band and measures at about –85 dBm. With the same 20W 600 MHz transmit tones, there is approximately a 13-dB difference between the measured PIM values at the 600 MHz and 1900 MHz band antennas. This could be the difference between a cell site being passed or failed. 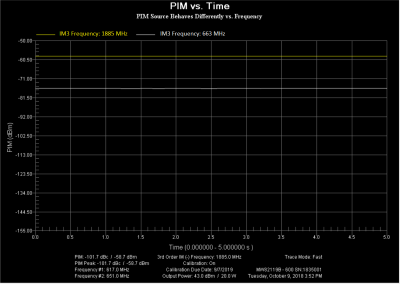 As higher speed, higher bandwidth networks are in operation, the demand for higher linearity construction is required. With that, the recommended IEC 62037 20W test power level may no longer be effective. A better specification for today’s (and tomorrow’s) mobile communications networks is 40W (46 dBm) test power.

Using the Anritsu PIM Master MW82119B DTP-to-DTP trace overlay feature allows two different Distance-to-PIM (DTP) traces to be viewed at the same time on the analyzer display. In this instance, the yellow line is the 40W DTP trace and the green line is the 20W DTP trace. In Figure 5, the green trace measures < -107 dBm, which failed to identify external PIM source that is 5 meters from the antenna. When measured at 40W, a rapid increase in PIM was observed and detected. Doubling the test power from 20W to 40W improves measurement accuracy and provides an improved method to thoroughly test modern mobile communications systems and devices. 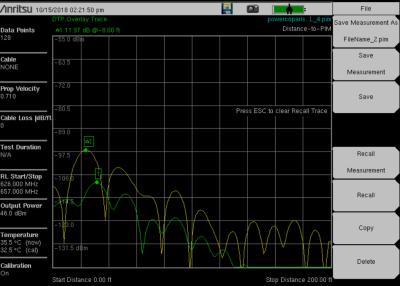 To ensure good network performance, mobile operators or field technicians must verify PIM performance at both the 600 MHz and 1900 MHz uplink frequencies when transmitting two 600 MHz tones. Testing PIM at both frequency bands is imperative to mitigate PIM issues in the field.

Read an application note on this topic to gain a better understanding of this important PIM measurement.

Integration of multiple technologies across indoor and outdoor networks has placed tremendous pressure on m...