Maritime ports are a major component of the nation’s freight transportation system, as they handle 75% of America’s international trade by volume, according to an annual report to the United States Congress. Moving the estimated $900 billion worth of goods transported to and from the U.S. each year by container ships requires tremendous synchronicity between arriving and departing ships, as well as the trained personnel at ports responsible for smooth entry and exit.

This doesn’t even take into account the thousands of cruise ships whose ports of entry and departure stretch the east and west coasts, as well as the Gulf of Mexico. Maintaining the safety of passengers, as well as goods being imported and exported requires reliable communications between those aboard the vessels and the ones on land.

Mobile networks are key to the success of the maritime industry because they provide the means by which maritime safety data, ship position reporting and weather forecasts, as well as other information, can be passed to ships at sea. Remote spectrum monitoring tools are being implemented that provide cost-efficient methods of ensure the operation of these critical networks.

Reliable communications are no easy task due to the complex RF environments associated with our nation’s ports. From operational considerations such as in- and out-bound vessels, dockside logistics, and freight movement to safety issues, including perimeter management and dockside protection, numerous signals are being transmitted. There is also the issue of illicit signals being transmitted that jam transmission – whether intentional or not – that can wreak havoc on port operations.

Radio frequencies are typically allocated by country, so devices built for one country or region can cause interference in other regions of the world. Many channels are utilized in open water which can cause interference for port operations. Often, devices onboard a ship arriving from across the ocean are mistakenly left on when the vessel enters a port of call. The potential for adverse effects increases as the boat approaches the shoreline. During these times, laws and regulations of the host port are applicable. If an electronic device that is not authorized for use is energized while the vessel is docked and waiting for unloading and loading, the resulting interference could cause multiple issues and service outages.

Of course, in today’s world there is also the threat of intentional interference by nefarious groups who wish to cause disruption or worse to our maritime ports. Early detection and geolocation of these sources can greatly reduce or eliminate interference that can hinder network performance and upset port operations.

Government regulators often use outdoor monitors, such as the Anritsu Remote Spectrum Monitor MS27102A (figure 1), along with its Vision™ software, to enforce spectrum policies and protect our ports. These remote tools provide early detection of suspicious signals and conditions, among many other capabilities, including: 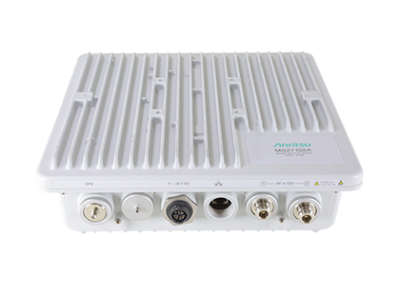 Many ports will install three or more remote spectrum monitors at strategic terrestrial locations to achieve precise geolocation. Such a configuration makes it easier and more efficient to identify a vessel or group of ships that are causing interference. Deployment of the proper spectrum monitoring solution will allow maritime professionals to take swift and appropriate actions to restore optimal network operation.

There are a few essential criteria that should be considered when choosing a remote spectrum monitor for maritime ports. Considering the outdoor environments where probes are positioned in a permanent or semi-permanent location for radio surveillance and monitoring, durability is critical. Effective tools should also be capable of sweep rates up to 24 GHz/s, which allows for the capture of many signal types, including periodic or transient transmissions, as well as short “bursty” signals. Another critical specification is 20 MHz instantaneous FFT bandwidth to capture wideband, real-time signal activity for subsequent post-processing

To learn more about remote spectrum monitoring for maritime applications, you can download this free application note.