Spectrum monitoring is a vital network management tool, not only because of existing RF spectrum crowding and the added network density associated with the rollout of 5G. The need to monitor transmissions, particularly at government locations such as airports, seaports, and other points of entry, as well as at utility grids, military facilities, and other sensitive sites, is necessitated by the increasing use of drones. 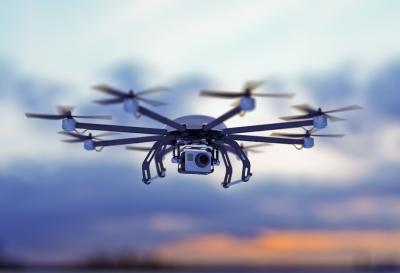 Spectrum monitoring systems can help facilitate the identification and removal of illegal or unlicensed interference signals, including drone detection and mitigation. Designing the proper backhaul will help efficiently and effectively process the signals so that appropriate action can be taken in a timely manner and security can be maintained.

There are three primary methods for geo-locating RF signals of interest – Power of Arrival (POA), Time Difference of Arrival (TDOA), and Angle of Arrival (AOA). In most situations where modulated signal bandwidths are greater than 25 kHz, including those associated with drone detection and mitigation, TDOA is the most accurate process.

TDOA can provide a very precise location estimate of < 100 meters in a short period of time. To successfully use TDOA, it is essential to understand the type of signals that can be used; how the results depend on the geometry of the measurement based upon the probes and source locations; the sources of uncertainty and how to mitigate them; and how to detect if the answer is meaningful.

Each measurement updates the signal position to provide tracking points for the path taken, so the faster the data can be processed the greater the success. TDOA geo-positioning is performed using I/Q measurements. I/Q captures can be quite large, gathering many Mbits of data as a function of both capture bandwidth and bit resolution. The time to send all I/Q measurements back to a central location for analysis significantly impacts the tracker’s ability to update new measurement positions and follow fast moving objects such as drones. 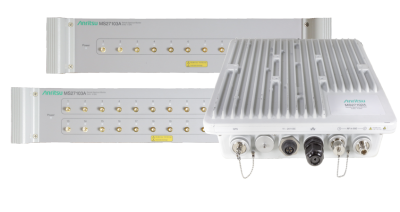 Once a drone is detected, its video signal is captured, processed, and transmitted in an I/Q format. There are several methods to implement the backhaul channel to transfer this valuable measurement data back to a central server. Some are better suited for transmitting I/Q data than others.

Optical Fiber – A preferred choice is to use fiber in a closed system. Each deployed remote spectrum monitor will need a pair of Ethernet-to-fiber converters or media converters that manipulate the signal so it can be transferred via fiber to a PC/server location for processing. A second converter at the PC location translates the fiber signal back to Ethernet.

There are several important parameters that must be considered when using a media converter, including:

At the receiving end of each IQ backhaul, an Ethernet switch is required to combine every signal for input into the PC/server. A Gigabit plug-and-play switch should be used.

If the media converter and switch are deployed outdoors, they should be placed in a waterproof enclosure. Depending on the environment and signal power, remote spectrum monitors for drone  detection can be deployed at approximately 500 meters on a triangle side. If one remote spectrum monitor is co-located near the PC/server, two fiber rolls should be used; otherwise, three rolls are required.

Microwave Point-to-Point (P2P) – Another option for drone detection and mitigation applications is microwave P2P. Many P2P systems (transmitter and receiver pair) will use 2.4 GHz or 5 GHz as a backup in the event of adverse conditions. When used at the lower frequencies, Wi-Fi connectivity can be established to further extend the link, if needed. For P2P to operate effectively, line of sight between transmitter and receiver must be established. Figure 2 shows an example of a microwave P2P backhaul using radio links. 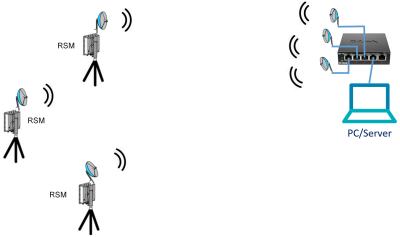 Considerations for choosing a P2P system include:

Ethernet – A remote spectrum monitor can be connected via Ethernet to a larger hub, such as a corporate network, where transmissions can be done. A typical scenario would be to place a remote spectrum monitor at a building rooftop serviced by an internal LAN connection with other monitoring solutions spaced across multiple buildings with an internal LAN connection. When configuring this backhaul, the bandwidth required by the I/Q transmissions must be considered so as to not disrupt normal network traffic.

Wireless Modems – 4G LTE modem tests have shown that tracking updates can be 2-3 times slower compared to fiber or P2P, making them an unsuitable option for a commercial drone tracking operation. A minimum of 5 MB/sec data rates on the uplink is necessary if a wireless modem is used for I/Q data transmission.

If there is no other option, a router should be used so Dynamic Host Configuration Protocol (DHCP) configured addresses match with Domain Name Server (DNS) servers. Routers can be programmed to automatically use a specific DNS service, allowing the use of names (rather than numeric IP labels) for accessing the remote spectrum monitor.

To learn more about how to configure a backhaul for remote spectrum monitoring that may include drone detection, download a new application note entitled Backhaul Requirements for Anritsu Remote Spectrum Monitors Use for RF Signal Tracking Applications.

A broadband VNA system is now available that covers low frequencies through 220 GHz and accompanying probes...