Ensuring network connectivity so first responders can perform their mission-critical duties is never an easy task. Often, police, fire, and EMS are deployed to emergency situations that, by their very nature, can inhibit communication. One such scenario is during natural disasters. A new report sheds some light on the impact an earthquake can have on commercial and private networks.

The HayWired Earthquake Scenario—Societal Consequences is the third volume of U.S. Geological Survey (USGS) Scientific Investigations Report 2017–5013. Recently released, the report describes the HayWired scenario developed by USGS and its partners. The scenario is a hypothetical yet scientifically realistic earthquake sequence that is being used to better understand hazards for the San Francisco Bay region during and after a magnitude-7 earthquake (mainshock) on the Hayward Fault in California and its aftershocks.

One chapter of the report is devoted to observations of earthquake damage that could be realized on telecommunications and information communication technology. It covers every aspect of that ecosystem, including central offices, copper and fiber cables, base stations, and cell towers (free-standing, rooftop, and building-mounted antennas).

Impact of Earthquakes on Networks

Figure 1 is a map showing the combined hazards for all types of cellular sites for the HayWired scenario mainshock in the San Francisco Bay region. Each cellular site is identified based on the highest level of hazard mapped for shaking, liquefaction and landslide probability, and fire density (burned-building square footage relative to the developed area containing the fires). The white star shows the mainshock epicenter. 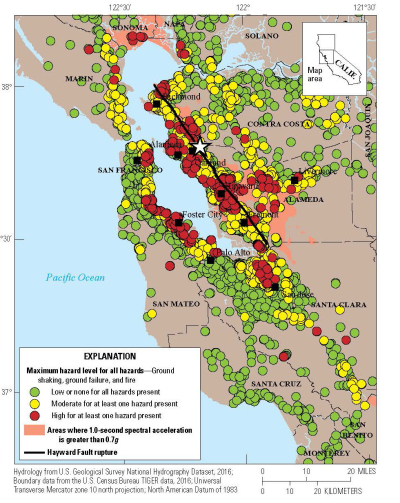 The USGS report highlights all the considerations that go into designing wireless networks. In a natural disaster scenario such as an earthquake, the hope is that public safety networks will continue to provide fast, reliable connectivity. First responders rely on effective communications to act quickly and save civilians and property. From firefighters racing to locations that are ablaze and EMS and first-aid squads traveling to care for those injured, to police officers maintaining control, the network is critical to controlling chaos that accompanies a natural disaster.

Maintaining connectivity during natural disasters can certainly be beyond a network operator’s control. Using the data results from the HayWired Earthquake Scenario report can help public safety organizations best plan to increase the chances of maintaining network operation during an earthquake. The best laid plans, however, do not provide a complete guarantee but it will certainly improve the possibility.

Network operation during clear days and without a natural disaster is something that mobile operators can control. A manmade problem – interference – is a factor that can be prevented, with proper network design and testing. This is particularly important as FirstNet continues to be deployed throughout the country.

All these LMR and LTE systems can coexist with proper engineering design practices and careful frequency planning. Interference issues are still a major concern as the interaction between all these systems in the 700 MHz band may create passive intermodulation (PIM) products. System uplinks can be significantly affected by PIM interference generated by existing LTE cellular downlinks from a wireless carrier’s network. This problem will only be exacerbated as FirstNet is added to the mix.

All carriers operating networks in the 700 MHz band will need to ensure high-quality installations with special care taken to limit or prevent PIM signal levels from degrading overall network performance. This applies to their own networks as well as other carriers’ networks, such as FirstNet.

Utilizing the proper test tools during FirstNet deployment will help minimize manmade causes of network issues for first responders during a mission-critical operation. Many PIM issues will likely be external. To locate these causes and remove them, field technicians will have to conduct the necessary testing of FirstNet networks. Anritsu offers a complete suite of AT&T-approved PIM hunting and testing equipment, including the PIM Master™ MW82119B analyzer (figure 2) and PIM Hunter™ probe. 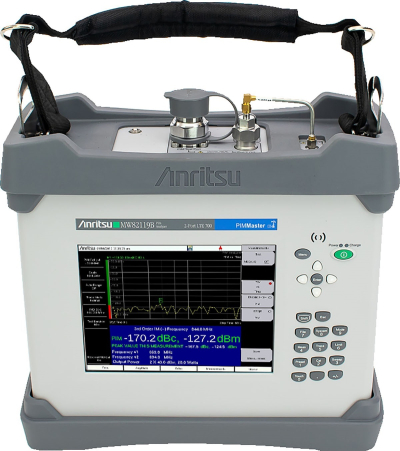 Proper test solutions are only part of the solution. Field technicians will need training on how to use the equipment efficiently and conduct necessary measurements accurately. Anritsu provides certification courses that can help ensure PIM interference is not introduced.