Colocation of cellular towers is now commonplace, as it provides advantages for municipalities, carriers, and users. For elected officials, colocation can reduce the number of sites within their community, gaining favor with their constituents. Carriers experience better network coverage through colocation, which in turn provides benefits to users.

One key consideration with colocation is interference, even more so than with a conventional tower. While oftentimes the cause of interference at a co-located site is due to the various frequencies converging at the tower, there are occasions when the source is Passive Intermodulation (PIM) due to environmental conditions. In these cases, the culprit can be the barbed wire fencing often used as a barrier around the towers.

Such was the case recently with a UHF P25 public safety system that was co-located with TV and FM broadcast stations. With the proper test tools, including the Anritsu PIM Master™ MW82119B battery-operated, high-power portable, PIM analyzer and LMR Master™ S412E handheld public safety test solution, field technicians were able to locate the source of PIM and make the necessary changes to improve the UHF P25 transmission.

Atop a mountain on the outskirts of a city was a tower originally deployed for TV and FM broadcast that had a 60-watt UHF P25 repeater added to accommodate public safety communications. The Rx sensitivity of the repeater was strong when the Tx was off, however, when the Tx was on, Rx sensitivity dropped 17 dB. This caused a problem, as public safety users were unable to key up the repeater with a 3-watt portable radio from five miles away.

Upon arriving at the site, the technicians noticed that the Tx antenna was located just three feet from a barbed-wire fence. Initial testing on the duplex filtering verified that it was operating according to specification.

A spectrum survey was conducted at the P25 repeater antenna location. The Anritsu S412E was used in spectrum analyzer mode with a UHF mobile whip antenna at the end of a test port cable. The goal was to see the spectrum with the P25 repeater keyed on, so it was critical that the analyzer not be overloaded. To ensure this, a 10-dB attenuator was used in front of the analyzer and the attenuator setting in the analyzer was 20 dB. There was no indication of overload based on the measurements taken.

The whip antenna was then held near the barbed wire fence. Evaluating the DC to 1 GHz spectrum, the highest-level signals were the P25 repeater Tx and the numerous FM stations at the site. Levels of nearby TV stations were ignored because they were 10 dB below the FM stations. Accounting for the 10 dB external attenuator, many of the FM broadcast station levels were -10 dBm. Further evaluation revealed that there were 11 FM broadcast stations, as shown in figure 1. 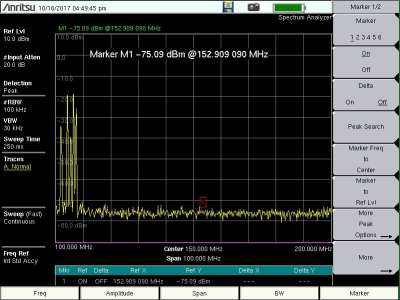 The P25 Tx frequency and the 11 FM broadcast frequencies were entered into an online PIM calculator. Based upon the data, the conclusion was that the FM stations were strong enough and on frequencies that could mix with the P25 Tx signal and interfere (desense) with the P25 repeater Rx.

The team suspected that the barbed wire fence was the source of environmental PIM. To confirm this hypothesis, a 700 MHz Anritsu PIM Master with a low PIM 700 MHz yagi (8 dB gain) antenna was used to radiate the barbed wire fence with two frequencies and analyze the returning IM3 levels (figure 2). The antenna was aimed up, down and towards the fence to acquire the full scope of the environmental conditions. 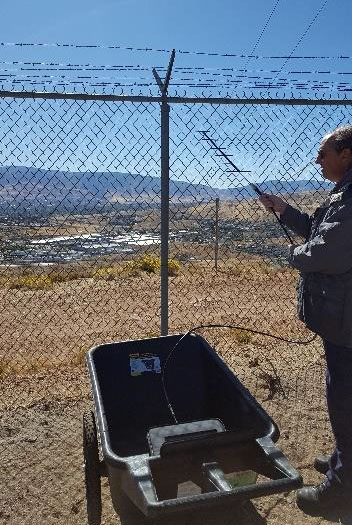 When the yagi antenna was aimed towards the sky, the PIM Master indicated -125 dBc level. The PIM vs. time display in figure 3 shows the results. When the antenna was pointed at the barbed wire fence from a distance of three feet, the level jumped +20 dB to -103 dBc. This result indicated that the barbed wire metal support rod junction was a source of environmental PIM. 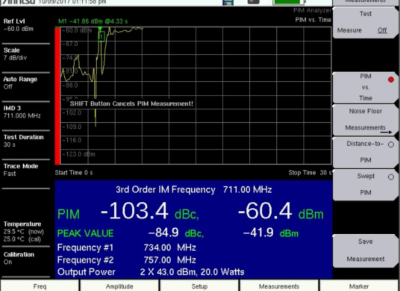 While the 700 MHz PIM Master was not able to directly measure the PIM from the 450 MHz Tx antenna, the team used the 700 low PIM yagi to radiate the antenna in isolation using a wood pole. The PIM seen was much lower than from the chain link fence. Subsequently pointing the yagi up in the air at the rebar showed over a 50 dB difference in the PIM reading.

It was apparent that the P25 receive antenna could not be near the barbed wire fence. To correct the problem, the duplex filter was split, and the Rx antenna was raised 30 feet and placed further from the fence. The Tx antenna remained near the fence. The result was that the Rx sensitivity was no longer degraded by 17 dB when the Tx was on. The extra height also improved the received sensitivity from downtown users by 9 dB. The net improvement to the system performance was more than 26 dB.

What the case study proved was that if a site has significant sources of environmental PIM, such as from barbed wire fences, the UHF receive system may see significant interference. If that is the case, the symptom may be degraded Rx sensitivity with the Tx on, assuming proper Tx to Rx isolation from the duplex hardware has been verified.

To learn more about PIM, you can visit this Passive Intermodulation page.

Why Remote Spectrum Monitoring is Important

According to the Federal Railroad Administration, there were more than 1,000 train accidents in the United ...