How to Mitigate Interference in Spectrum Reallocation Environments

Spectrum reallocation has become a necessary approach used by government regulators to address the growing bandwidth issue associated with the increasing use of wireless devices. While it carves up RF frequencies to meet consumer demand, it can create challenges when it comes to interference. That’s why mobile operators need the proper test tools to effectively conduct spectrum clearing and geo-locate legacy signals that may hinder transmission of new signals.

A prime example is the repurposing of the 600 MHz frequency band (previously the domain for broadcast television) in the U.S. for LTE and 5G networks. As mobile networks begin to use this spectrum, new license owners will no doubt detect unwanted legacy signals. Therefore, spectrum clearing sweeps and signal geolocations must be done to determine the interference signal source to ensure networks meet key performance indicators (KPIs).

In most cases, the uplink channels for the 600 MHz band (663 MHz - 698 MHz) are surveyed for unwanted signals. The reason is that uplink signal power levels are lower than the downlink and, therefore, more susceptible to interference problems. In areas where time domain duplexed (TDD) signals are used, downlink and uplink signals share the same frequency spectrum and are separated only by time. Spectrum clearance becomes essential in these scenarios. Even low levels of interference can result in poor cellular performance, particularly slow data throughput.

As part of the 600 MHz band reallocation, 1,000+ TV stations must move or cease operations in Band 71, so cellular service can be deployed (Figure 1). The uplink cellular band is in the 35 MHz range of spectrum located between 663 MHz - 698 MHz; downlink is 35 MHz wide and is in the 617 MHz - 652 MHz range. Each band is divided into seven 5 MHz blocks, from A through G. Under the new regulations, broadcast television stations will remain on channels 36 and below. Channel 37 and the gap between uplink and downlink bands will be used for other applications.

The first step field technicians must take when clearing spectrum is to set-up a handheld real-time spectrum analyzer (RTSA), such as the Anritsu Field Master Pro™ MS2090A, for the frequency channel to be analyzed. Other parameters of interest include RBW/VBW settings and reference levels. The technician must also determine if a preamp is required. To make the process more efficient, specialized software, such as the Anritsu Mobile InterferenceHunter MX280007A (MIH) system, can be loaded on a tablet or similar device that is compatible with the RTSA.

Technicians can select the Spectrum Clearing option from the dropdown menu on the MIH software, which displays a pop-up window (Figure 2) to set the threshold power at a level where a signal would start to be considered problematic. Appropriately setting the threshold limit means the proper signals will be below the threshold and not trigger unnecessary alarms. They will also be ignored during data collection, for more efficient and accurate analysis.

Threshold value is typically a few dB above the instrument noise floor. Spectrum traces can also be saved each time a signal is measured above the threshold setting. If needed, the value can be changed after collecting measurements in the spectrum clearance drive operation. Done during post-processing, this capability is useful for locating unwanted signals at unanticipated power levels.

With a RTSA such as the Field Master Pro MS2090A, technicians can set a go/no-go limit based on the spectrum analyzer’s channel power measurements. Other spectrum analyzer options, such as min and max hold, can be used for the drive. Min hold is generally for measuring signals that appear underneath larger fluctuating signals, such as those in LTE uplink bands. Max hold can be used to find intermittent or bursty signals, which are often encountered in radar applications.

Spectrum traces for each measurement point where unwanted or interfering signals are present can be saved with this type of solution. This facilitates discovery of the type of signal(s) present by viewing spectrum profile, center frequency, and bandwidth. For example, broadcast TV previously occupied the 600 MHz band. If the spectrum shape captured and recorded at the point of interference has the characteristics of a broadcast TV transmitter, it is likely that the transmitter has not been shut down.

Another benefit of saving spectrum traces is that it allows other signals in the band to be recorded. Typically, this is caused by intermodulation products mixing at out-of-band frequencies or by illegal signals. Additionally, faulty or degraded cable TV networks can leak radiation into both the UHF and VHF bands. Figure 3 shows a RTSA display of a signal present in the 600 MHz band. Such signals can disrupt the cellular signals to be deployed in the area. 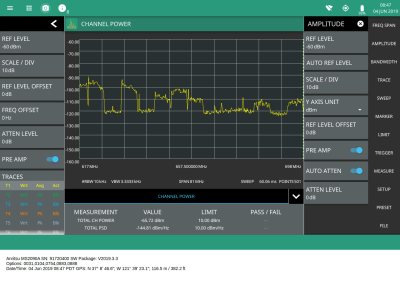 A field technician’s job is not finished when the spectrum clearing operation is complete. All detected signals should be geo-located so the source can be determined. Software such as MIH can continuously measure the signal(s) of interest and provide signal position estimates on a map, as well as voice prompts to guide the user to the signal source of the interfering signal(s).

Spectrum clearing is only one benefit of interference hunting software. For example, field technicians can use MIH to quickly locate single and multiple emitters. Channel power measurement capabilities in MIH also allow users to track and locate signals that fluctuate in frequency, such as amplifiers and repeaters driven into oscillation.

With dedicated software such as described here, field technicians can get close to the interference source. In some cases, however, it will not be able to locate the exact signal position. In these scenarios, field technicians will have to find the precise interferer position by using a Yagi or other directional antenna connected to the RTSA.

For this final step, the field instrument can be configured to emit an audio tone that changes in pitch and volume as the power of the interfering signal changes. Connecting a Yagi antenna and sweeping it in a systematic pattern in the direction of the interfering signal, then noting the antenna direction when the tone is at a maximum, makes it possible to quickly identify the precise direction in which the signal is coming.

To learn more about spectrum clearing and geo-locating signals in a spectrum reallocation environment, download a free application note.

Source Harmonics are Important When Selecting a VNA

Filters are a key component in most RF and microwave systems, including those designed for emerging 5G comm...