Anyone who has looked up in the sky the past few years knows drone use has increased significantly. So much so that the global market revenue for commercial and personal drone production is expected to be north of $11.2 billion by 2020, according to a Gartner study.

In many cases, drones can be used by public safety and broadcast professionals for advantageous processes, such as aerial-based spectrum analysis. For example, the compact (size of a mobile device), lightweight (255 g; 9 oz.) Spectrum Master™ MS2760A from Anritsu easily mounts under a commercial drone. Coupled with a small form factor computer stick to run the application, it is now possible to make coverage mapping measurements and search for interfering signals over a wide area in 3D.

Drones (figure 1), however, are becoming a greater safety concern in high-security areas, such as penitentiaries, seaports, airports, and government buildings. Identifying the location of the controller provides law enforcement with the ability to react in real-time to prevent nefarious acts and capture those who attempt them. The right system can identify key elements such as drone model, as well as the course, speed and altitude of a drone. 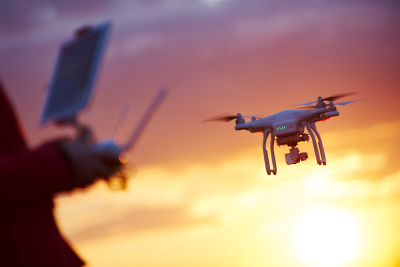 Several methods of drone detection can be used. Among the technologies are audio detection, jammers, video and radar detection and geofencing. The most effective tool, however, is RF technology. By intercepting video and control signals telemetry data sent between the drone and the remote controller, calculations can be made to detect, track and identify drone activity.

The data that drones detect can vary, but the most advanced systems on the market can detect:

What to Look for in RF Solution

High Dynamic Range - A large dynamic range allows a small signal to be seen in the presence of a large one. This is essential if the signal of interest is small and close in frequency to a large signal. Dynamic range for a spectrum analyzer can be specified in many different ways with wildly different numbers. One example of a very useful dynamic range specification is greater than 106 dB in a 1 Hz RBW, using the method 2/3 (TOI-DANL).

Third Order Intercept (TOI) - Instruments with poor TOI will be more susceptible to generating spurious responses (spurs) internally that may be confused with real, external signals. In other words, the effect of an overload – or near-overload – appears and is more pronounced. A good TOI figure is 15-20 dBm, with two –20 dBm tones and no attenuation. Be wary of instruments that specify TOI with >0 dB attenuation, because this makes the TOI number artificially high.

Overload Indicator - A front-end overload is possible when signals are received through an antenna. If an overload occurs, add attenuation, external band-pass filters, or move to a different location. If the field user does not know that an overload is happening, a lot of time will be wasted investigating signals that are generated inside the instrument!

Reliability (Hardware Watchdog Timer) - A remote spectrum analyzer (figure 2) should include a watchdog timer to insure long-term stability for remotely deployed monitors. Watchdog timers are used to detect and recover from computer malfunctions, where accessibility is limited.

Fast Sweep Speed – Ideally, a minimum 20 MHz instantaneous FFT bandwidth is necessary to allow near real-time sweeps across a wide spectrum to be made. Conducting sweeps at rates up to 24 GHz/s will allow for the capture of multiple signal types, including periodic or transient transmissions and short “bursty” signals.

Displayed Average Noise Level (DANL) - Instruments with a poor DANL may not be able to see a low-level signal due to a high noise floor. In any given RBW, their noise floor will be higher than an instrument with a lower DANL. This tends to mask low-level signals. A good DANL for drone detection systems is generally less than –160 dBm in a 1 Hz RBW. When setting up a monitoring network, having a noise floor or DANL that is 3 dB better may mean half as many monitoring stations are necessary.

Low Spurious - RF and microwave transmitters often require extensive spur searches to ensure they are not causing potential interfering signals or radiating unintended signals outside of their designated signal parameters. A spectrum monitor with low self-generated spurious signals allows reliable detection of low-level signal for these transmitters under test.

Remote Firmware Update Capability - In the event of an application error or power fluctuation which causes an ongoing interruption in monitor communication, a re-boot policy will bring the remote probe back to its previous state. Under these conditions, the current firmware should automatically reload, and online operation restored. Instrument settings will then be restored to the previous state.

If, for any reason, the firmware in the unit becomes corrupted, a warning such as a “Golden” firmware image is used to return full operation of the probe. This feature is particularly useful for remote firmware updates.

Video Bandwidth Control (VBW) - A VBW filter is a fast way to average the displayed data and lower the noise floor. A user-adjustable VBW filter is an important feature when selecting a tool to monitor in the current RF environment.

In recent years, numerous improvements have been made in noise figure measurements through better algorithm...

November 16, 2018 Passive Intermodulation (PIM) is a problem for every wireless network – commercial or pri...