Radar is used in a wide range of military, commercial, and research environments. Many radars are expected to operate uninterrupted for decades. To ensure that their performance does not degrade over time, it is necessary to measure their key performance metrics at regular intervals.

One prime performance area monitored is the characteristics of the transmitted RF pulses. The best test tool to measure this signal is a spectrum analyzer with real time capability (RTSA), such as the Field Master™ Pro MS2090A. When combined with a pulse analysis option, this combination provides the accuracy and insight necessary to ensure performance by capturing the pulsed signals in both frequency and time domain.

An important element of the pulsed measurements is that they should be traceable and compliant with IEEE Std 181-2011. This standard specifies precisely what parameters need to be measured and how those measurements should be calculated.

Two prominent radar systems that are safety critical and require routine maintenance are airport surveillance systems and weather radar. Each has particular elements but testing their performance requires a similar approach.

The United States Federal Aviation Administration (FAA) rolled out Airport Surveillance Radar (ASR-11) for airport surveillance. Currently, there are more than 400 ASR-11 radars (figure 1) deployed across the U.S. ASR-11 is an integrated primary and secondary radar system that has been deployed at terminal air traffic control sites. 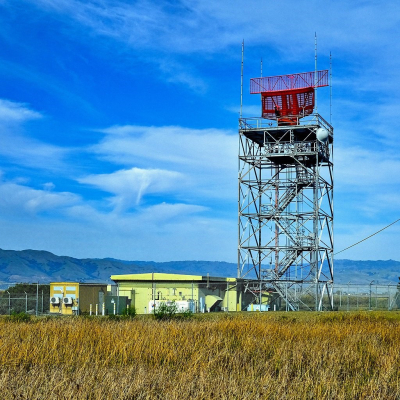 Primary Surveillance Radar – The primary radar uses a continually rotating antenna mounted on a tower to transmit RF pulses that reflect, or backscatter, from the surface of aircraft up to 60 nautical miles from the radar. The system measures the time required for radar to echo to return and the direction of the signal to determine the distance of the aircraft from the radar antenna and the azimuth of the aircraft in relation to the antenna.

Primary radar operates in the range of 2700 MHz to 2900 MHz. The transmitter generates a peak effective power of 25 kW and an average power of 2.1 kW.

Secondary Surveillance Radar – A second radar beacon antenna is attached to the top of the primary radar antenna to transmit and receive area aircraft data for barometric altitude, identification code, and emergency conditions. The air traffic control centers use this system data to verify the location of aircraft within a 60-mile radius of the radar site. The secondary radar also provides rapid identification of aircraft in distress. Secondary radar operates in the 1030 MHz to 1090 MHz range and has transmitting power from 160 W to 1500 W.

In the U.S., a network of over 150 ground-based weather radars, known as the Next Generation Weather Radar (NEXRAD) system, is operated by the national weather center. Weather radar characteristics are similar to the airport surveillance radars. Both use the same frequency band and high-power pulses. Frequency planning is important to ensure there is no interference between the technologies, for this reason.

The short duration of the pulses and the rotation of the transmitting antenna make it impossible for a spectrum analyzer in frequency sweep mode to capture the pulsed signals associated with these radar systems. This is true even when the trace maximum hold feature is applied to the instrument.

Conversely, a spectrum analyzer with an RTSA, such as the Field Master Pro, can display the RF spectrum in the frequency domain and the full pulse characteristics in the time domain in the pulse analyzer mode. The pulse analyzer provides detailed numeric results for all the common radar parameters. This allows the radar signal to be always captured (figure 2). The result is field measurements of airport surveillance and weather radars can be completed accurately and quickly without interrupting operation. 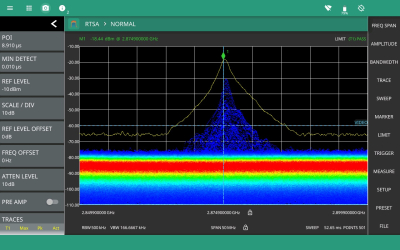 The test set up is similar for both radar systems. A waveguide horn antenna is connected to the analyzer and pointed towards the radar. Measurements can be made miles from the radar location with this configuration.

To view the pulses in time domain, users can put the spectrum analyzer into zero span mode. Analyzing the pulse trains in zero span mode highlights the change in pulse repetition frequency used by the radar in different modes to analyze changes in atmospheric conditions. To view the individual 1 µs pulses, the time scale must be reduced to a few milliseconds. With the pulse analyzer option, the Field Master Pro can measure pulse rise times as low as 30 ns using a 40 MHz RBW, with sweep times as short as 60 ns.

Enabling the pulse analyzer option provides measurements on pulses and pulse streams in full compliance with the IEEE standard. For measurements of pulse repetition frequency, duty cycle and off time, at least two pulses must be captured and displayed. Typically, it is better to capture more for greater detail as shown in figure 3. Depending on the pulse train and individual pulse characteristics, it may not be possible to perform all measurements, such as rise time, in the same span. 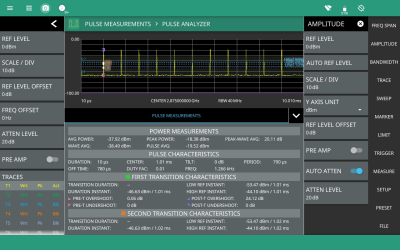 To display a single pulse, the sweep time is reduced. Vertical marker lines are automatically placed on the 10% and 90% linear power points for rising and falling edges, as well as horizontal markers for the 50% reference level used to measure pulse duration. The IEEE default values can be manually overridden, if required, with the MS2090A, as well.

To learn more about conducting measurements on pulsed radar signals, download the application note from Anritsu.

Selecting the proper field test solutions is an integral part of FirstNet's successful roll out.

New 2-Port PIM test equipment is available to split the PIM test signals between the Band 14 and Band 17 an...