Passive Intermodulation (PIM) is a problem for every wireless network – commercial or private. With the rollout of the First Responder Network Authority (FirstNet) in the 700 MHz band now underway, the issues of PIM have become imperative for the operators, contractors/sub-contractors, installers, wireless technicians, and RF engineers responsible for developing, building, and maintaining the next-generation public safety wireless network. It’s also an issue for commercial networks sharing the same crowded 700 MHz spectrum.

Understanding the challenges associated with the deployment of FirstNet, the potential PIM factors, and what interference can mean to the performance of the network will be important to its successful operation. In this post, we will outline those aspects and steps to minimize PIM.

FirstNet will reside in a 20 MHz block (Band 14) in the 700 MHz public-safety environment, and the uplink (UL) and downlink (DL) are divided into equal 10 MHz chunks. Since FirstNet is being allocated for a spectrum already crowded by commercial wireless services and narrowband public safety bands, existing PIM issues can potentially become worse.

Figure 1 shows a typical self-interference issue. DL subcarriers mix to form intermodulation products. In this scenario, the FirstNet DL subcarriers mix to form IM products. IM3, IM5, and IM7 may cause interference in the UL; the former two in the narrowband UL, and IM7 in FirstNet UL. IM3 and IM5 may be particularly troubling as they are 35 dB (>3; 100x) and 15 dB (30x) larger than IM7, respectively. IM9 may cause interference in FirstNet, though it does not appear likely.

Another possible scenario is if FirstNet is paired with existing 700 MHz cell sites used for commercial purposes. In these environments, IM3 and IM5 products can interfere with all carriers’ commercial UL and also the FirstNet UL, as shown in figure 2. To emphasize, the fact that IM3 is much larger than the higher order IM products means its effect can significantly degrade performance of networks co-located on the tower.

Potential Impact of PIM on FirstNet

Intermodulation products will cause higher noise levels, which will limit network performance. That’s because higher noise levels result in lower Signal to Interference plus Noise Ratio (SINR), which will reduce channel quality indicator (CQI). The reduced CQI forces cell sites to switch to lower order and less efficient modulation schemes, resulting in lower data throughput. In worst case scenarios, service can be lost entirely. Given the mission-critical nature of the first responder network, this cannot be allowed to happen.

While PIM has obvious effects from the network side, it also creates issues for the user equipment (mobile devices) used by police, fire, EMS, and other responders. The higher noise levels at the base stations will cause the mobile devices to drain their batteries faster because the mobile devices will transmit at higher power to compensate for the reduced sensitivity at the tower.

Contractors/sub-contractors, installers, field technicians, and engineers responsible for the rollout of FirstNet need to minimize PIM (it’s impossible to eliminate it entirely). The goal is to reduce it to a level below the noise floor or low enough that performance is not impaired. One way is to improve linearity because it reduces the magnitude of all IM products. There are some fundamental steps that can be taken, including:

It is a virtual certainty that PIM issues will become more pronounced when FirstNet is deployed, due to the crowded 700 MHz spectrum in which it will operate. To prevent it so legacy commercial and public safety networks, as well as FirstNet itself will meet KPIs, field users will need the proper PIM test tools, such as the Anritsu PIM Master™ MW82119B. With a field solution such as this, users can determine if PIM is external or internal to the antenna.

Internal PIM – As we have noted in many posts, PIM can be caused by factors such as faulty or loose connectors, metal flakes, and poorly terminated or damaged cables. Using Distance-to-Fault (DTF) technology to automatically measure through the PIM test port, a “map” showing connector locations can be created. A unique Distance-to-PIM (DTP) with DTF overlay (figure 3) can indicate where the PIM issue is inside a feed system. 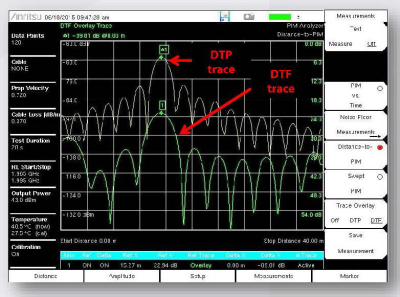 External PIM – DTP technology can also identify the location of PIM sources beyond the antenna. However, pinpointing the PIM source when it is outside the antenna is a much bigger challenge. To simplify this process, the PIM Master can send F1 and F2 test frequencies into the antenna. Once that is done, attach a PIM probe to a handheld spectrum analyzer, such as the Anritsu Spectrum Master™, tuned to the IM3 frequency. To block the test frequencies while passing the IM3 frequency, a bandpass filter needs to be connected, as well.

The probe essentially acts as a near-field antenna that can be used to scan the area around the tower. In most cases, the IM3 signal will be relatively high level (–50 dBm to –80 dBm). As soon as the PIM analyzer is turned on, the IM3 signal should appear on the spectrum analyzer display. When the PIM Hunter probe tip is located close to the PIM source, the level will increase rapidly.

January 7, 2019 Anyone who has looked up in the sky the past few years knows drone use has increased signif...