Large vehicles, such as aircrafts, ships, and trains, rely on advanced wireless technology for communications, systems control, and sensor interconnects. Successful operation of these systems on large commercial and military vehicles requires interference mitigation. Often, vector network analyzers (VNAs) are used to ensure signal transmission. In today’s post, we explain how VNAs can ensure systems on large vehicles operate according to specification.

Interference can be caused by numerous devices. Laptops, electronic games, and mobile devices are common examples. There are also nefarious acts designed to intentionally create interference. Autopilot disconnects, erratic indicators, and vehicles veering off course are potential consequences that may be caused by interference.

RF/µW cabling is used throughout modern vehicles. Checking cable phase and magnitude performance over frequency becomes more important – and challenging. This is especially true as systems used in larger vehicles are increasingly sophisticated and complex, and connections between different parts of the vehicle are often well over several meters in length.

Once installed, fully characterizing long RF/µW cables with vector S-parameter measurements creates a connection challenge between a traditional VNA and the widely spaced cable ends. The interconnect cables required to attach the VNA ports to the cable under test adds significant insertion loss and phase instability to the measurements over the distances involved.  Cable replacement due to wear-and-tear adds considerable expense to the test setup, as well.

Figure 1 shows how to conduct cable measurements on ships and aircraft using the Anritsu ShockLine™ ME7868A VNA. As depicted, the portable port modules connect directly to the cable under test. 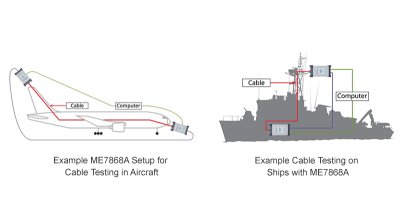 The configuration can be used to conduct the following tests on cabling used in large vehicles:

With so much cabling and wireless equipment now aboard large vehicles, electromagnetic interference (EMI) is a critical factor that must be considered. It can cause equipment performance to degrade or even malfunction. EMI can affect radios and radar signals, interfering with communication between the aircraft or ship and the control tower and ports, respectively.

As a result, EMI effects must be considered in all aspects of large vehicle design and certification. Standards such as RTCA DO-160 for environmental conditions and test procedures for airborne equipment or MIL-STD-461, developed by the Department of Defense (DoD) to control EMI issues, are often used as the basis of evaluation.

One major method to combat EMI is to provide shielding of various line replaceable units (LRUs) and harnesses. Shielding a device or system not only reduces EMI emissions, it improves susceptibility performance. With advances in wireless technology and increased device signal sensitivity, shielding becomes even more important to maintain the functionality and safety of equipment.

Engineers often use VNAs to test RF/µW shielding and propagation on large vehicles. Typically, the configuration requires very long test port cables to reach around the vehicles. At the distances required for these tests, coax cables introduce insertion loss and phase instability so significant that different transmission media (such as optical cabling) must be used to enable S-parameter measurements. The additional hardware and setup complexity significantly raise the cost and time required to make the propagation and shielding measurements.

To alleviate additional expense and improve test times, the ME7868A VNA (figure 2) can be used to conduct OTA measurements on large vehicles, including aircraft and ships. 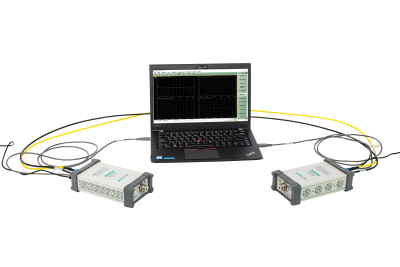 The ME7868A is configured with portable port modules that eliminate the need for long test port cables. It supports typical large vehicle tests, including:

Figure 3 shows the difference between a traditional complex configuration and the more efficient, streamlined ME7868A OTA set-up to conduct measurements on aircraft.

The Anritsu ShockLine ME7868A has a unique design that makes it well suited for conducting measurements on systems used on large vehicles. As outlined in the examples described, it is a chassis-less 2-port VNA with portable port modules that supports a frequency range from 1 MHz to 43.5 GHz.

It can conduct tests with port modules spaced up to 100 meters apart. The ability of the VNA ports to be connected directly to each end of long cables in large vehicles optimizes dynamic range and improves phase stability in vector S-parameter testing. VNA ports can be physically placed close to large DUTs or at widely placed test antennas without the need for additional complex test hardware.

Many of the advantages are realized due to the patented nonlinear transmission line (NLTL) technology used in all ShockLine VNAs. It delivers wider bandwidth and higher dynamic range than competing technologies, enabling better measurement accuracy and repeatability with longer intervals between calibrations. NLTL is also employed on Anritsu’s VNA-on-chip design, which has inherent temperature and time stability advantages. NLTL technology also enables cost-effective, high-frequency measurements.

Given the $80+ billion investment by mobile operators, the rollout of 5G was inevitable. Another certainty ...