In our last blog post, we discussed how passive intermodulation (PIM) is prevalent in wireless networks due to the influx of multi-band towers. While this is certainly a major issue – especially with the rollout of 5G New Radio (NR) and FirstNet – it is far from the only cause of interference. There are numerous environmental conditions, both from Mother Nature and mankind, that field engineers and technicians responsible for network performance need to be aware of to maintain key performance indicators (KPIs).

There is a big reason to effectively test and monitor for PIM: economics. Tower crews have an associated cost of between $5,000-$15,000 per day, depending on site location and other variables. When you consider it may take a few days to diagnose and troubleshoot a problem, having a sound approach to PIM testing can significantly improve the bottom line by reducing unnecessary deployment of crews.

As a refresher, PIM can be caused by internal and external factors. Many of the age-old causes of PIM are addressed on this Anritsu PIM Technology page. We will highlight two in this post:

Oxidation – Antenna system components include connectors, cables, antennas, circulators, duplexers, and diplexers. Over time, these components will suffer from oxidation (figure 1) that will have a nonlinear effect on RF signals. 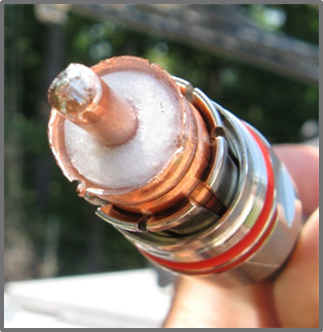 Metal oxidation of components can be fixed in a variety of methods. A simple, short-term solution is to forcibly bang on the cables with a wrench to remove corrosive elements. A more reliable and long-term fix is to replace the cable, components, or antennas. Before doing so, check the connector torque. If it is too tight, loosen it to see if the PIM is eliminated. It may prevent you from making an unnecessary component change.

In general, base station antennas are installed at high locations such as on building rooftops or iron towers. Thus, the antennas are affected by random vibrations caused by natural elements such as heavy rain and wind. Measuring intermodulation distortion characteristics before and after a vibration accelerated degradation test will reveal that vibrations are a main cause for the intermodulation distortion performance.

Cables can change their physical configuration as temperature varies, too. A cable that happens to be the right length to cancel out PIM when cool may show strong PIM after its length is changed due to a hot day, or vice versa. In addition, the physical change in length can convert a good connection to a poor one, also generating PIM.

Urban settings create a slew of potential PIM causes. Many sites are on rooftops and congested areas, so even if they are installed properly and continually meet performance parameters, they are always susceptible to signal degradation. In some cases, it is constant; in others, the issue is intermittent. Here are three potential causes to consider:

Vibration – Wind is not the only variable that can create vibrations strong enough to affect site performance. PIM can also be generated by a steady flow of large vehicles, such as busses and trucks, and trains passing by a site. This may lead to connectors being loosened and contaminants created over time.

Construction – New skyscrapers, apartment towers, and commercial construction projects can wreak havoc on a wireless network. During construction, PIM may be intermittent due to the materials, scaffolding, and equipment. If the new building is constructed within the line of sight of two antennas, then it can be a more on-going issue that will need to be addressed.

Existing structures may also prove to be PIM causes. Because sites are on rooftops and in proximity to guard railings, exhaust vents, and other metallic elements that can oxidize over time, a perfectly good site can show signs of degradation. Technicians must test for metal “anomalies” and clean up the rooftop to maintain site performance.

Billboards – Stationary billboards that have been newly installed pose the same potential issues as buildings. We have also seen mobile billboards cause intermittent PIM that needs to be monitored and tracked.

Given the multitude of potential PIM sources and the expense of deploying a tower crew, it is imperative that thorough and efficient site monitoring is conducted. One step to achieving this goal is to have the proper test tools to locate all the potential causes of interference.

Monitoring – Having the proper solution to monitor a site is critical, especially if there is intermittent PIM. A tool such as the IQ Fiber Master™ MT2780A analyzer can be installed and monitor traffic to help understand when and the severity of PIM. Running it for days or weeks allows time resolution intervals (figure 2) to be generated. Clues as to when PIM is present can be revealed with these graphs. 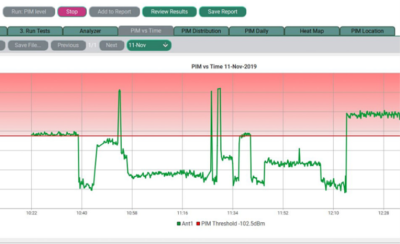 Troubleshooting – After the diagnostics uncover the internal/external cause of PIM, troubleshooting tools can be used. One of the most valuable is Distance-to-PIM™ (DTP), which helps identify the location of PIM faults inside the feed system as well as beyond the antenna. For example, if DTP states the PIM cause is 25 feet from the antenna and you are on a rooftop, you can do a 25-foot radius and see if oxidation from a roof element, such as an exhaust cover, is the culprit. There is no need to take the site down in this scenario.

Anritsu’s PIM Hunter leverages DTP to pinpoint the location of external PIM beyond the antenna. By walking along the arc of the DTP distance from the antenna with the PIM Hunter, technicians can pinpoint the source of the PIM. It can be paired with a variety of Anritsu spectrum analyzers, including the Spectrum Master™, BTS Master™, Site Master™, and Cell Master™ models, to efficiently track interference to its source. In this scenario, a precise PIM signal source, such as the PIM Master™ MW82119B, is used to interact with the non-linearity in the RF signal path.

To learn more about how to most effectively measure PIM and the best test tools to use, register for a PIM eLearning course or a DTP webinar that outlines how to speed site repairs.

Engineers who design high-frequency electronic circuits must gain a vital understanding of the properties o...

There are numerous environmental conditions that field engineers and technicians responsible for network pe...