Verifying Positive Train Control (PTC) radio performance in the field is no easy task. That point was proven recently when a Class 1 national railroad believed its PTC radios were drifting out of tolerance. When the OEM radio supplier challenged the field test results and began charging thousands of dollars in service fees, the railroad needed a reliable and accurate test process. Thankfully, Anritsu developed a solution that has saved the railroad money while also ensuring the PTC network is operating according to specification.

Upon conducting initial field tests, the railroad returned to the supplier a small number of radios that appeared to be out of specification. When the OEM conducted its tests, it found no issues but did not levy a No Fault Found (NFF) charge for the evaluation. As the number of radios returned increased to almost 100, however, the OEM supplier assessed a $1,150 Return Merchandise Approval (RMA) fee to the railroad.

This increase in radios found out of specification was escalated to railroad management, who became worried that the fees assessed for all the returned units would be significant. There was the added concern by railroad executives that their PTC collision avoidance system was not in compliance with the design requirements. If that was the case, the railroad would be subject to potential government fines. Additionally, if the system did not operate properly, there was an increased risk of a preventable accident occurring.

With all these variables lurking, railroad management needed a reliable field deployable test analyzer that could accurately measure Peak Envelope Power (PEP) or run the risk of incurring significant NFF and RMA fees. That’s when Anritsu offered to work with them to develop a solution.

Specifically, the test solution that was necessary had to be capable of accurately verifying that the PEP on PTC mobile radios operating in a 217.6-222 MHz range met published specifications. By definition, PEP is the highest undistorted power supplied to the antenna transmission line over a single or a series of RF cycles. Pass/fail criteria are determined by how well the RF power measurement falls within the window.

Recognizing the urgent need for a solution that met these requirements, Anritsu representatives met with railroad personnel. Working closely with the railroad company throughout, Anritsu was able to quickly develop the PTC Analyzer option for its LMR Master™ S412E Land Mobile Radio Modulation Analyzer (figure 1). 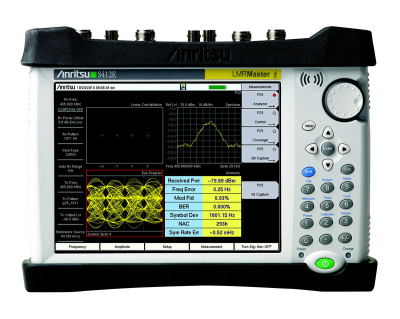 The LMR Master-based PEP solution was able to verify that the radios complied with the 48.75+/-1 specification defined by the PTC network supplier and adhered to by the OEM supplier. It has eliminated the need to return radios to the OEM for verification, saving money and maintaining the relationship between the Tier 1 national railroad and the supplier.

Field technicians are currently using the handheld analyzer during pre-installation component test, system test, preventative maintenance, and repair and troubleshooting. Its ease of operation and accurate results has made management more confident in their PTC network.

Overall, the LMR Master has proven to be a valuable field tool in other applications for the national railroad. It is an easy-to-use, lightweight (<10 lbs.), field-rugged, battery-operated solution that replaces an RF power meter, antenna/system line sweep solution, and 2-port device tester. The analyzer can detect rogue interference sources ranging from CW to bursty signals, map RF coverage, and support individual radios and radio systems. In addition to PTC, railroad technicians are using the LMR Master to test P25, TETRA, DMR, and analog UHF and VHF radio systems. The LMR Master’s LTE Analyzer can also be used to verify the new FirstNet nationwide LTE public safety network.

By working closely with a Tier 1 national railroad, Anritsu developed a test solution to quickly and accurately test PEP radio power without to avoid very costly RMA and NFF fees. Additionally, railway technicians can now use the LMR Master with the PTC Analyzer option to troubleshoot and remediate issues they were unable to address previously.

To learn more about the LMR Master and how it can be used in PTC applications, download the PTC testing application note.

October 3, 2018 One of the hottest topics in the public safety arena is the deployment of private Long Term...