Passive intermodulation (PIM) can be generated from external sources outside the antenna, as well as within the antenna line system. As mobile operators add antennas to existing towers and co-located equipment from different operators are installed at the same base station, the possibility of system self-interference from mixed signals (i.e. external PIM) has dramatically increased. A new way to accurately measure PIM, as well as tools to conduct these all-important tests, are necessary to address the rise of co-located sites.

Choosing the proper test methods and instrument is vital because PIM problems caused by mixed signals can massively impact a cell site by significantly reducing its footprint, value, and return on investment (ROI). The result is often increased capital expenditures (CapEx) and operating expenses (OpEx) on additional sites to compensate for the loss of available capacity.

Traditional PIM testing systems with just one test port are not effective for external PIM analysis of co-located sites. An analyzer with a single test port cannot distinguish and classify external PIM caused by co-location, particularly in the 700 MHz commercial and public safety wavebands.

The ability to conduct 2-port PIM measurements is particularly important in today’s wireless network landscape. A perfect example of the need for 2-port solutions is evident by Band 14 (FirstNet) and Band 17 co-located sites. Figure 1 shows the proximity of the two bands in the spectrum.

FirstNet is utilizing a nationwide LTE network operating on 10 MHz of the 700 MHz Band 14 spectrum licensed to the FirstNet Authority. FirstNet state plans approved by each state and six territories stipulate that 1,000 new LTE cell sites are to be built. FirstNet has partnered with AT&T to deploy the majority of its network; most will be deployed and installed in rural locations where cell coverage did not exist previously.

FirstNet subscribers consist of 11,000-plus public-safety agencies representing more than 1.2 million connections who have access to a network that covers more than 2.61 million miles in the U.S. The last published data on the network stated that 90% of FirstNet Band 14 has been deployed.

With the rollout of FirstNet, the potential for interference caused by external PIM increases considerably. For this reason, PIM hunting on cell sites where Band 14 and Band 17 are deployed is very necessary despite the challenges.

A new process of how to identify and locate external PIM on Band 14/Band 17 cell sites is being developed. Additionally, new 2-Port PIM test equipment (figure 2) is available to split the PIM test signals between the Band 14 and Band 17 antennas on a sector. This better simulates actual site conditions and helps focus mitigation efforts on the PIM sources with highest service impact. 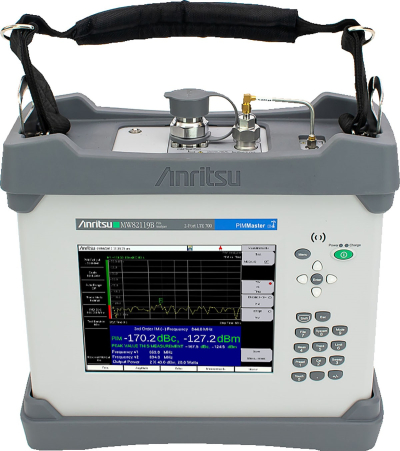 An effective PIM testing solution for co-located sites with Band 14 and Band 17 combines the functionality of a traditional 1-port test system with a 2-port test system to distinguish between internal and external PIM sources. One example of a 2-port solution is the PIM Master™ MW82119B-0703. RF field engineers and technicians, and third-party contractors can conduct highly accurate PIM measurements and conduct troubleshooting in the FirstNet Band 14 and Band 17 spectrum for co-located sites with the field instrument.

This configuration simulates real world conditions and makes troubleshooting external PIM more accurate. The tones only re-combine at PIM sources seen by both bands, allowing mitigation crews to focus their effort on the PIM sources with the highest impact on site performance.

The PIM Master MW82119-0703 can also function as a traditional one-port PIM test set for verifying PIM in cable and antenna systems. To convert between a two-port and a single port PIM measurement solution, the user simply connects or removes the supplied jumper cable between the two ports.

Cost-of-test in the field is lowered with this type of solution. Rx noise floor creating PIM issues that affect KPI can be identified and located more efficiently. Test time is reduced because multiple antennas are used to find real world external PIM problems.

As FirstNet continues to be rolled out, PIM issues associated with co-located sites will need to be addressed. To gain a better understanding of the importance of 2-port measurements and how to accurately and efficiently conduct them, register for the Anritsu 2-Port PIM Hunting Certification class.

An RTSA with a pulse analysis option provides the accuracy and insight necessary to ensure performance of a...

Using app-based processes can save time and money when conducting close out reports, which helps ensure new...