From its inception, FirstNet promised increased speed as one of its benefits. Well, that appears to apply to more than signal transmission. The rollout of the nationwide public-safety broadband network (NPSBN) that will significantly improve the capability and reliability of communications between first responders is more than 90% complete. That puts it about a year ahead of schedule.

A key part of FirstNet deployment is testing the network to ensure it operates in accordance with specifications and regulations. Of course, interference is also a concern, as FirstNet continues the crowding of the RF spectrum and co-location of tower sites. For these reasons, selecting the proper field test solutions is an integral part of the network’s successful roll out.

Though only 10% of FirstNet remains to be deployed, the network is not expected to be complete until 2023. That is because many remaining sites are some of the most challenging to install.

Testing the base stations, which now cover more than 2.7 million square miles, is only one part of the project. For example, earlier this year, the FirstNet Authority announced the addition of 19 deployable assets to the dedicated FirstNet mobile LTE vehicle fleet. Communications Vehicles (CVs), Micro FirstNet Band 14 Satellite Cell on Light Trucks (SatCOLTs) and terrestrial Cell on Wheels (COWs) for Business Continuity and Disaster Recovery are part of this taskforce. All these vehicles are dedicated to quickly addressing operational requirements where there is no terrestrial coverage in an emergency situation or a planned event.

The need for public safety networks to deliver broad coverage has never been more important. There are now nearly 4 million primary first responders in the U.S., up from 3.5 million pre-pandemic. That number doesn’t even include doctors, nurses, and others who are also typically at mission-critical scenes. Nor does it account for first responders connecting multiple devices, from handsets to body cams and robotics.

Another reason why testing is playing a key role is the integration of 5G into FirstNet. A task order from the FirstNet Authority has prompted the launch of a 5G core to intuitively provide America’s first responders with an optimal experience. First responders in 38 cities now have access to millimeter wave (mmWave) 5G spectrum. We discussed how 5G will affect public safety networks in a previous blog.

All this adds another element for those responsible for public safety network operation. While the focus is on FirstNet, considerable attention and support must remain on legacy technologies and systems. Reliable operation of all mission-critical communications must be maintained in the most challenging environments.

Public safety test solutions need to provide support to these emerging needs. For 5G in particular, an in-building coverage mapping bundle is beneficial, as it enables technicians to verify proper signal field strength across multiple frequencies in a single walk-through. Any signal from 9 kHz to 6 GHz can be measured, including all public bands, Wi-Fi, NB-IoT, and public service bands (P25, DMR, LTE/FirstNet, UMTS/WCDMA, TETRA). It does it without the need for GPS, allowing stairwells, elevators, and other difficult areas to be mapped easily.

Vector Signal Analysis (VSA) software is another valuable tool. It can provide the testing support to ensure legacy systems operate according to specification. VSA software analyzes IQ data acquired with handheld field analyzers, such as the LMR Master™ S412E and the Field Master Pro™ MS2090A. Software tests physical layer modulation quality of various transmission standards such as FSK and GFSK for DECT systems, and π/4 DQPSK for TETRA systems. 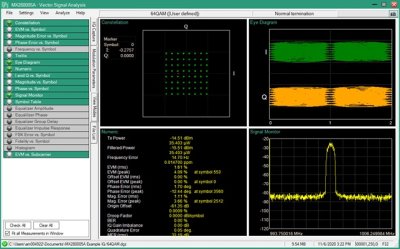 Conducting measurements is straightforward. The receiver/analyzer captures and converts the RF signal into its complex baseband components, referred to as I/Q signals. The “I” is the in-phase and “Q” is the quadrature signal. The captured I/Q files are transmitted to a PC for various measurements relating to signal quality.

Information is encoded into the RF signal by modulating the RF carrier. Once received, each signal is digitized into a bit pattern, which in turn is decoded by the receiver. The demodulation process begins after the transmitted RF signal is down-converted to a lower, intermediate frequency (IF), filtered, and presented to an analog-to-digital converter (ADC) in the receiver. A detector splits the signal into its in-phase and quadrature components, which are subsequently processed by the VSA.

Once the signal is transformed into the frequency domain, phase information is lost. Although power levels as a function of frequency can be displayed, phase information is critical for signal quality estimations such as EVM and bit error rate (BER) measurements. The result is that demodulation is conducted while the signal remains in the time domain.

You can learn more about the VSA by downloading an application note on the subject. A Land Mobile Radio technology page also provides a primer on public safety communications systems.

Engineers designing high-frequency products throughout the world are realizing the benefits of the unique S...

An RTSA with a pulse analysis option provides the accuracy and insight necessary to ensure performance of a...