These are busy times in the wireless world. LTE is being actively rolled out at 600 MHz, the FirstNet public safety network is being deployed and the race to launch 5G New Radio (NR) is underway. While each brings long-awaited services, there are other unwanted aspects, including the potential for interference. For carriers and those contracted to maintain network operations, understanding how to locate and prevent interference that can degrade performance is becoming increasingly challenging.

The influx of these new technologies, cell sites, and antennas will undoubtedly cause spectrum crowding. For some sites, the result can be one of the most difficult types of interference to discover and eliminate – intermodulation, which is generated when two or more transmitters’ signals are mixed together. Interference can be caused by many other factors – from rusty fences and tin roofs near a tower to faulty components and systems – as well. For engineers and field technicians, having the right test tools to mitigate interference of all kinds is even more necessary as new networks are rolled out.

One of the biggest challenges right now is the deployment of LTE over the 600 MHz band. Currently, a major carrier is installing more than 30,000 cell sites throughout the country to launch its 600 MHz LTE network. Other purchasers of spectrum during the 600 MHz auction include a leading satellite company and cable operator. While neither has announced definitive plans for how or when they will use the spectrum, they spent too much money not to eventually use up their blocks, creating a more congested band.

The Federal Communications Commission (FCC) recognized the potential for interference and stated that licensees operating in the 600 MHz band must not cause harmful interference to reception of full power and Class A broadcast stations transmitting on a co-channel or adjacent channel. The FCC rules include a 5 MHz adjacent channel separation requirement when a 600 MHz LTE device operates within the protected service contour of a full-power or Class A television station. Adhering to this rule will require the proper test tools.

Since the 5G NR standard was approved at the end of last year, mobile carriers have been preparing to deploy their next generation networks. In the past few months, each of the leading mobile operators has announced 5G sites in key cities, notably Atlanta, Chicago, Denver, Los Angeles, New York, and San Francisco.

The strain of 5G has not been felt yet by any network, as the service footprint is very small. There are also no 5G devices for consumers to purchase, let alone use. With full-scale deployment scheduled in 2019, though, carriers and those contracted to install 5G networks must have a test plan in place. Without one, the technology may not fulfill its speed, latency, and other performance promises at launch.

Band 14 deployments are underway in all 50 states and Puerto Rico, with the initial network buildout scheduled to be completed by year-end. While more than 2,500 cell sites have had Band 14 capability installed, a more telling number is that an additional 10,000+ sites are in the process of Band 14 upgrades throughout the country. On-air testing of Band 14 is ready in more than 40 states, including California, Florida, Illinois, North Carolina, Oklahoma and Texas.

Ensuring interconnectivity between FirstNet subscribers and users of the current public-safety broadband network will be imperative. Another key factor will be to ensure operation of FirstNet in any scenario, given the mission critical nature of the communications. For these reasons, having the proper interference tools will be essential.

Deployment of all these new cell sites in an already crowded spectrum means that test tools will play a major role in all networks meeting their established KPIs. Therefore, field engineers and technicians need a comprehensive tool box with solutions that can monitor, track and locate interference and its sources. Anritsu has a portfolio to address all environments:

The Mobile InterferenceHunter MX280007A (figure 1) is a reliable tool to find single or multiple sources of interference. It works with the broad array of Anritsu’s handheld spectrum analyzers, providing interference hunting and spectrum clearing capability from 9 kHz to 110 GHz. The InterferenceHunter also has post-capture analysis capability so users can modify search parameters without re-driving the route. This allows re-analysis of the captured data as well as consulting with experts. 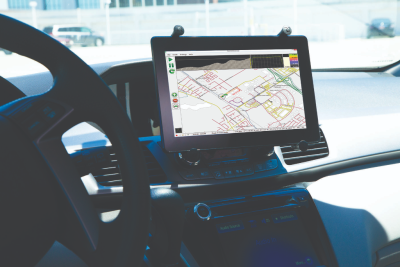 Remote spectrum monitoring tools are also available. These solutions are designed to mitigate interference problems and to identify illegal or unlicensed signal activity. These signals can be periodic or present at different frequencies over time, making the discovery and removal of these sources of interference a significant challenge. By using these tools to monitor spectrum on a continual basis, problem signals can be identified as they occur in real time.

The ergonomically designed MA2700A Handheld InterferenceHunter is equipped with a GPS receiver and antenna, an electronic compass, and a user-selectable preamplifier to help locate interference sources. It is designed to be used with Anritsu’s handheld field instruments that can be used to locate interference, which include the Spectrum Master™ handheld spectrum analyzers.

November 16, 2018 Passive Intermodulation (PIM) is a problem for every wireless network – commercial or pri...

November 6, 2018 As we discussed in our last post, PIM over CPRI is a new method that incorporates live tra...